Five years after the initial beta testing, the GPL 750 Odorizer has become the one to watch for low-flow odorization of natural gas, biogas, and renewable natural gas (biomethane).

The initial case study was conducted in 2016 (published in January 2017). In this study, the client had a challenging odorization site without remote communications requiring continuous service calls. GPL Odorizers and Linc Energy Systems teamed up, conferring with Sage Metering to solve the client’s problem. In the end, the client concluded, “The GPL 750 solved one of our most challenging odorization applications. It demonstrated accurate and repeatable odorant injection even in no-flow, low-flow, and intermittent-flow conditions.”

A natural gas distributor in central Tennessee had lost confidence in its odorization system at a low-flow site. The client agreed to test a beta unit of the GPL 750 Odorizer at this challenging site. A thermal mass flow meter was installed to accommodate the low and intermittent gas flow, communicate with the odorant injection controller, and ensure accurate and repeatable odorization. The GPL 750, a simple, precise, and reliable system, solved this challenging application.

A problematic natural gas odorization site was becoming a burden to a Tennessee natural gas distributor. Matt Stennett, the Chief Gas Engineer at the company’s Smithville location, was odorizing natural gas coming into a town using an odorant injection style system with a Williams Pump. There were issues with priming the odorant pump. Because there were no remote communications to the odorizer, the client had to frequent the site to verify that the pump was working and delivering the odorant correctly.

This gas coming to the site was low and intermittent flow, running at a maximum target flow of 12,000 SCFH. However, it was unclear how low the gas flow was, and the meter at the site was a turbine meter. The turbine flowmeter is considered a traditional flow meter technology, along with differential pressure and positive displacement meters. The turbine meter is a favorite device used to measure gas flow, particularly for clean, medium-to-high steady streams of low-viscosity fluids. This meter style measures volumetric flow based on fluid flowing past a free-spinning rotor, with each revolution agreeing with a particular fluid volume. Turbine meters measure liquids as well as natural gas flow. However, the turbine meter is notorious for having a low-flow cut-off at about 15% of the maximum flow capacity. 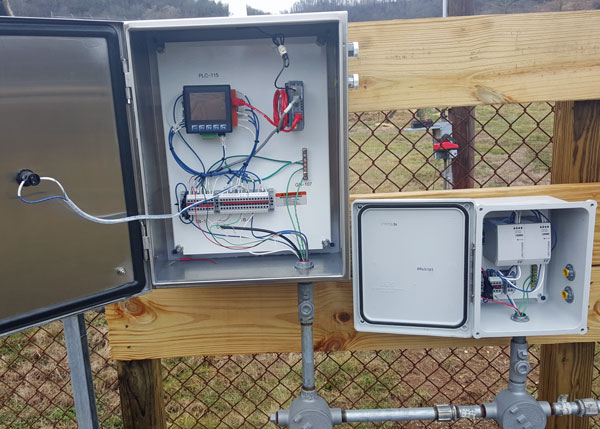 Members of Linc Energy Systems and GPL Odorizers met the client, Matt Stennett, at the American Public Gas Association conference show in 2015 in Broomfield, Colorado. At the time, the client mentioned that he had been performing countless service calls to keep an odorizer at a low-flow site functioning. I showed him our new low-flow odorizer and said that I was looking for a beta site to test the soon-to-be-released GPL 750 Odorizer. In the weeks to come, we spoke further. I sent him drawings of the proposed unit and specifications, including a complimentary modem to monitor how the system was performing from our home office in Colorado.

Knowing that there was a turbine meter at the site and not completely understanding how minimal the gas flow could run, we knew the turbine meter would not provide accurate data for the odorizer’s controller. We consulted with Sage Metering, the premium thermal mass flow meter manufacturer. The company designed a flow meter specifically for low and intermittent-flow odorization applications called the GPL 100 flow meter, which has a low-end sensitivity of 5 SFPM. 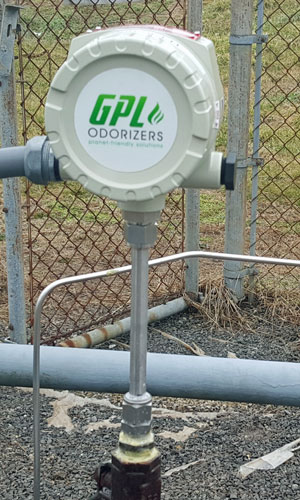 We installed the GPL 750 Odorizer and the GPL 100 Thermal Mass Flow Meter at the Tennessee beta site. The flow meter reads the gas flowing into that town and sends a 4-20 mAmp signal to the Horner computer, the GPL 750 Odorizer controller. This odorizer employs proprietary drip technology and injects a fixed measure of odorant into the gas stream proportionate to the flow, ensuring accurate and repeatable odorization even in low or intermittent flow.

After a couple of months of operation, the client called and expressed concern that the Horner controller showed much more flow (measured by the thermal mass flow meter) than the turbine meter’s data. We explained that anytime the flow plummeted below 1800 SCFH, the turbine meter did not register the gas flow because of its low-flow cutoff. Therefore, the thermal mass flow meter data was more accurate.

When following up with the customer sometime later to see how the odorizer was performing, the client was happy to say, “The GPL 750 has proven to be boringly reliable.” The customer had only needed to go to the site once to check an alarm, only to learn that there had been a power outage, and he needed to reset the modem. According to Stennett, the GPL system allows “much more accurate injections during low-flow conditions and makes it possible to document, calculate, audit, and prove it to ourselves and our state regulatory agency.” Stennett further stated, “The GPL 750 Odorizer solved one of our most challenging odorization applications. It demonstrated accurate and repeatable odorant injection even in no flow, low flow, and intermittent-flow conditions.”

The GPL 750 Odorizer and the GPL 100 Thermal Mass Flow Meter solved the customer’s challenging odorization application. The client no longer has to provide frequent service calls to the location.

The GPL 750, an eco-friendly approach to odorizing gas, is a reliable system for natural gas, biogas, biomethane/renewable natural gas, and propane. Here is a recent class with Garrett Cox and CR Wall.

Image by Markus Winkler from Pixabay

Thomas McDougal
Tom is a former engineer for Xcel Energy, where he designed gas meter and regulator applications. He has also worked for mechanical contractors and engineering firms approving gas meters and regulators in various applications. He currently manages the Linc Energy Meter and Regular Department and is working on flare gas measurement.
Recommended Posts
Comments 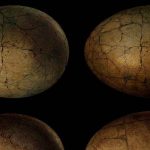