The activated sludge process is a conventional method in wastewater treatment, where wastewater is treated with aeration flow. Here blower air is pumped and diffused evenly to oxygenate the aeration basins. 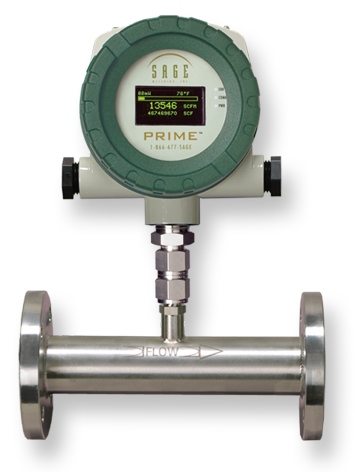 he oxygen feeds or nourishes microorganisms within the basin, so the bacteria thrive and consume suspended particulates. At various phases of the process, compressed air is used to oxygenate, clarify, filter, or disinfect. This is why compressed air is one of the most significant expenses associated with wastewater treatment.

By monitoring and controlling airflow with thermal mass flow-meters, the facility not only maintains the proper environment for optimum bacteria growth to accomplish its objective but it also significantly reduces the energy costs. In fact, some facilities have reduced energy consumption as much as 25%.

After bacteria have consumed the suspended particles, the solid matter is subsequently removed and enters a secondary process. Here, digesters break down the waste, creating digester gas which contains methane and carbon dioxide. The gas can be converted to renewable energy. Throughout this process, thermal mass flowmeters are used to measure mass flow. The Sage Meter has an extremely low-end sensitivity which is needed to handle the low flow typical of digester gas.